Prior to 1861 Mississippi didn’t have their own flag. They certainly didn’t have cool, custom, leather patch state pride hats, from the 3000 Hats Company. Although it is not commonly known, Mississippi’s original flag was known as the Magnolia flag. It was the official state flag from March 30th, 1861, to August 22nd, 1865. A special committee was formed to design the flag with a state coat of arms after the State Convention in Jackson declared its’ secession from the US. This historical event would forever change things, and Mississippi’s first flag was born. The flag featured a red background, a white rectangle in the center, a blue square in the upper left corner, a white star was depicted in the blue area, lastly there was a magnolia tree in the center of the flag. Thus, “The Magnolia Flag”. The new, deemed more suitable flag, was Mississippi’s official flag starting in March, 1861. However, the Magnolia Flag was not widely used during the war, due to the fact that variants of the more popular Confederate Flag were displayed much more frequently. At the end of the war the Constitutional Convention nullified a wide variety of ordinances and laws. Among th ordinances passed by this special committee, was the ordinance that put into place the flag that displayed a coat of arms. This made Mississippi’s first flag, The Magnolia flag nullified.

Beginning in 1894 the Magnolia flag was replaced by the well known and loved, now controversial, Confederate Battle Flag. The 3000 Hat Company celebrates Mississippi’s historic original flags and the flag, proudly offering a Mississippi Confederate Battle Flag, in a state pride leather patch hat in several colors and styles. This was the states 2nd official flag. The design consisted of three horizontal bands (the top was blue, the center was white, and the bottom was red). There is a red square in the upper left section of the flag with a blue cross that has thirteen white five-pointed stars. These thirteen stars naturally represented the current number of states within the Union.

In 1906 the state of Mississippi revised their legal codes. The legislature omitted mention of the Confederate Battle that was put into circulation in 1894, essentially leaving Mississippi with no legally official state flag from 1906 to 2001.

In January of 2001 the current Governor of Mississippi proposed a new flag design. However, the people didn’t put much Stock in the newly found design. Thus, when it went to vote, it was defeated. This caused the Confederate Battle Flag of 1894 to be retained.

The State of Georgia had a similar vote take place to remove the Confederate design from their flag just two short years later in 2003. The motion was passed with a majority vote. Mississippi was the only remaining state in the union that included the Confederate Battle Flag design. 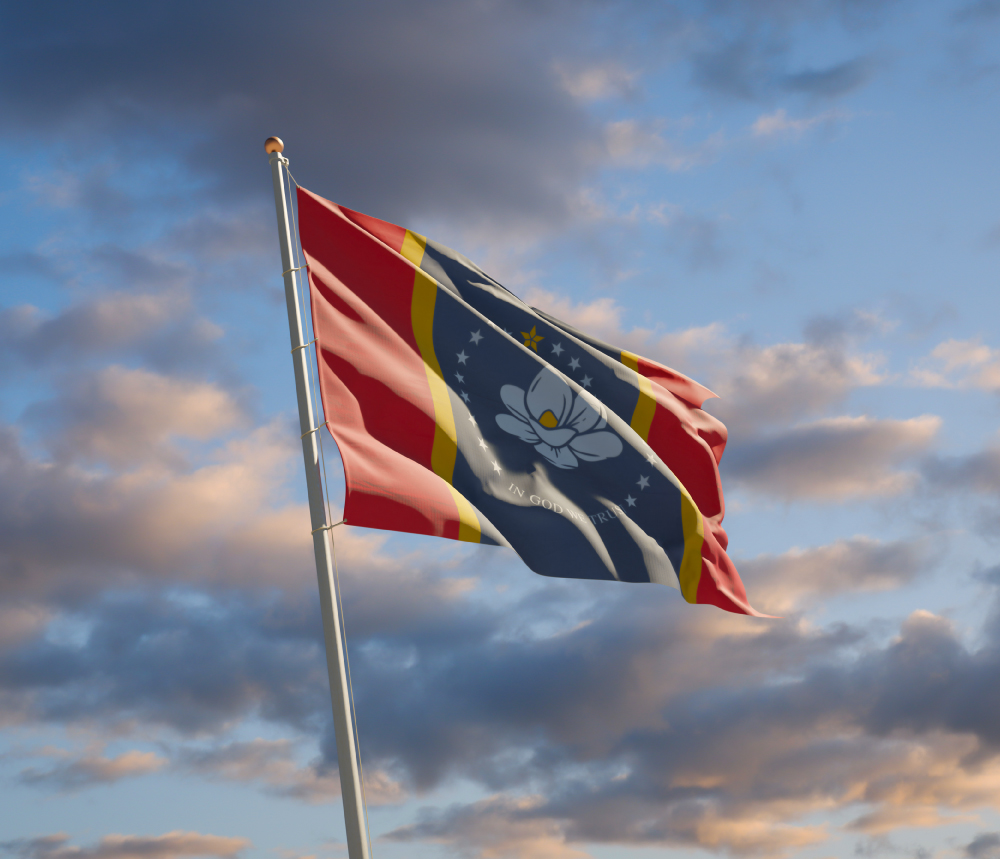 Several additional efforts to try and replace the Confederate Battle flag occurred, most notable in 2015 and 2016. The flag was excluded from being displayed in states such as, New Jersey, Oregon, and Philadelphia. Out of the fifty states in the Union, only Mississippi’s Confederate Battle Flag was excluded. Despite numerous flag related bills that called for change, the second Mississippi state flag remained. It was so strongly refuted that no bills put into place even made it out committee. There was even a federal lawsuit filed against the state of Mississippi claiming that their flag was symbolic of hate speech. The lawsuit wasn’t successful. When presented to the US Supreme Court, they refused to hear to case.

A bill was passed in 2020 for the removal and replacement of the 1894 Confederate Battle Flag. In midyear 2020, it was decided that we would stop standing around and scratching our beard stubble. Yet another commission was formed specifically with the task of redesigning the Mississippi flag, with the initiative to have a new flag by Fall of 2020. The design was required to have the words, “ In God We Trust” and was barred from containing any semblance of the Confederate Battle Flag. In November of 2020 “The Magnolia Flag” was approved by popular vote. It is now the official Mississippi state flag, and was signed into law by the Governor on January 11th, 2021. When will Mississippi go on the hunt for a third state flag design, or, will this be the symbol of the richly cultured state for decades to come.